A celebration at Marshfield High School 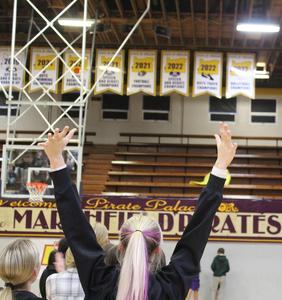 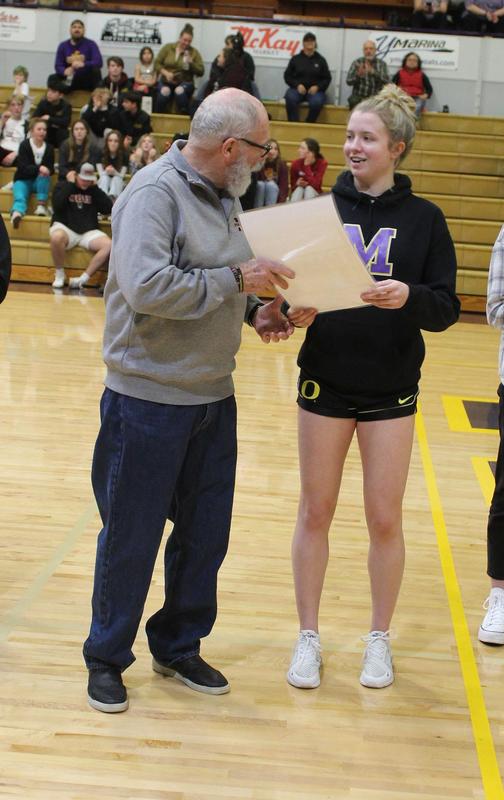 Tuesday night was a special night at Marshfield High School when the Pirates’ basketball teams hosted Junction City in the opening game of the Sky Em League.

While the boys and girls played valiantly, with the fourth-ranked girls winning the league opener, the real highlights came when the game was stopped.

Before the boys tipped off, Athletic Director Greg Mulkey honored a coaching legend as Junction City coach Craig Rothenberger coached his final game against Marshfield. Rothenberger is capping a historic career in 2023, his final season of coaching after 53 years on the sideline.

At halftime of the boys game, the 2022 state champion Marshfield volleyball team came back together to say thank you to the Coos Bay School District Board of Directors. The members of the volleyball team each signed a team photo, which was then given to the board members.

The Coos Bay School Board is made up of:

Volleyball team captain Kate Miles thanked the board members for their support, reminding them they are the only board in 48 years that volleyball has been a recognized sport in Oregon to win a state championship.

In between the boys and girls basketball games, volleyball again took center stage as the state championship team returned to the court to celebrate as the first volleyball state title banner was unveiled in the gym.

With the girls cheering, paper covering the banner was released, bringing about a mini celebration among the players who made history together a few months again.